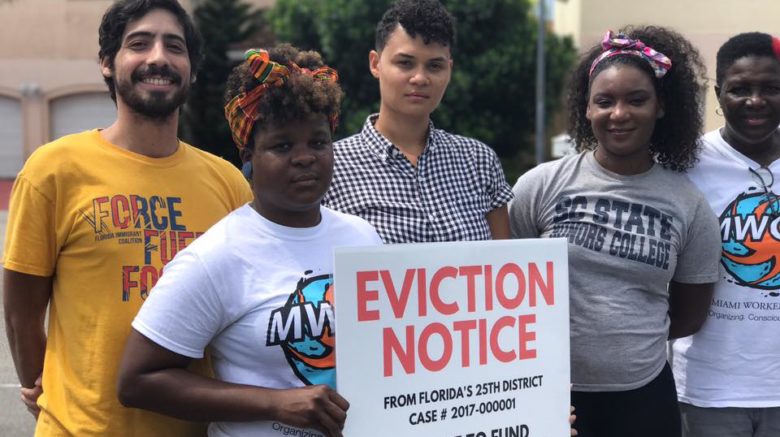 MIAMI – Today, housing advocates and Miami residents who believe that housing is a human right served an eviction notice to Congressman Diaz-Balart to highlight the acute affordable housing crisis gripping the country, and to call on him to vastly increase federal investments to address the problem. Diaz-Balart chairs the congressional subcommittee responsible for funding the U.S. Department of Housing & Urban Development (HUD). His committee voted this week on a draft spending measure that would eliminate some 140,000 housing vouchers nationwide, and slash funding for housing resources by $1.5 billion below what is required just to keep pace with current government commitments.

Trenise Bryant, Miami housing advocate, said “We had hoped that Congressman Diaz-Balart would fight Trump’s cuts and increase funding for HUD. Instead, just yesterday, his committee voted to do exactly the opposite and kick 140,000 people off of these vouchers. That’s why we, the people, think the Congressman should be evicted, until he demonstrates he understands what housing insecurity really feels like. Good and just public policy can only be developed with the direct input and experiences of those impacted the most by that policy.”
Today’s event was organized by Miami Workers Center, Right to the City and CarsonWatch to amplify the voices of Miami community members who oppose substantial HUD budget cuts proposed by President Trump and Secretary Carson, totaling more than $7 billion. If the cuts pass, Miami will be at-risk of losing nearly $24 million each year for housing assistance, and thousands of Miami residents who are currently in HUD-subsidized housing will be in jeopardy of becoming homeless.

President Trump and Secretary Carson have also proposed raising the rents on the poorest families in America by mandating minimum rents and slashing utility reimbursements (along with other harmful proposals). If these provisions are passed by Congress, residents assisted by HUD in Congressman Diaz -Balart’s district would see their rents rise by 20 percent, or an average of 66 dollars per month.

Walter Mae, a Miami senior citizen resident, said “Congressman Diaz-Balart should apologize for the cuts he passed yesterday in his committee, and instead fully fund our affordable housing needs. The majority of homes in Florida relying on vouchers include children or people who are elderly or disabled. Secretary Carson has already said he wants to demolish my neighborhood, and we’ll have nowhere to go once the housing assistance disappears.”

Half of all renters in America are cost-burdened, paying over 30 percent of their income to housing. This is over 21 million renter households. One in four of these pay over half of their income to housing, leaving no money left over for basic needs like food or childcare. Miami Workers Center, Right to the City and CarsonWatch seek to change this injustice, by galvanizing the power of the people through organizing in local municipalities all across America. Today’s protest was concurrent with the first tenant march against HUD cuts in Washington DC, organized by the #Nocuts Coalition, an alliance of over 40 organizations across the country.

###
The Miami Workers Center (MWC) is Miami’s leading social change nonprofit organization that fights for social, racial, economic and gender justice in Miami, Florida. We work to unite and grow the power of low-income Latinos and African-Americans from some of the most vulnerable neighborhoods of Miami, such as Liberty City, Wynwood, Allapattah and Little Havana. We fight for good paying jobs, affordable housing, immigrant rights, the protection of domestic workers and victims of domestic violence and sexual abuse.

Carson Watch is a federal housing watchdog committed to stopping President Trump, HUD Secretary Ben Carson, and their Congressional allies from any attempts to roll back fair housing protections and undermine the housing security of millions of Americans. Join the watch at CarsonWatch.org.