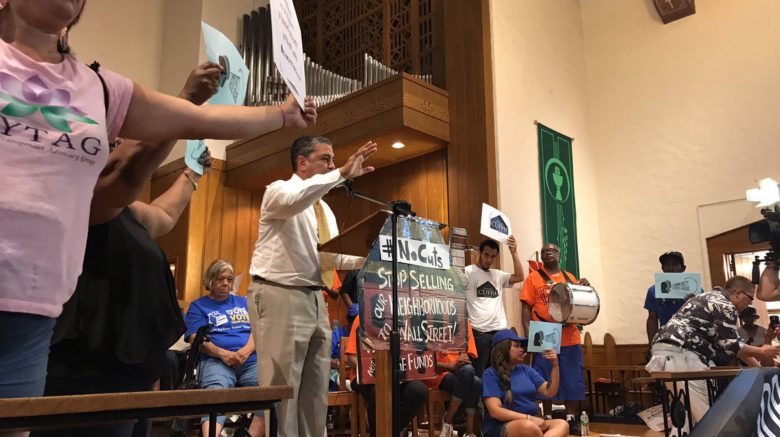 Hundreds of people converged in Washington for the Tenant March to fight against Trump’s staggering $7 billion cuts to HUD.

Organizations including Community Voices Heard, NY Communities For Change,Tenants and Neighbors, The Association for Neighborhood and Housing Development, The Senior Caucus, and many others bussed in from all over the country.

We’re ready for the #TenantMarch in DC to tell @realDonaldTrump and @SecretaryCarson #nocuts to our housing! pic.twitter.com/ayMK27dpQb

They were joined by Senator Elizabeth Warren and Representative Nydia Velazquez at a rally preceding the march where tenants shared their stories illustrating how devastating the housing cuts would be on their families.

“You know what those cuts will mean,” said Senator Warren. “Families will be forced to spend even more of their monthly income on rent, and that means less money for food, less money for books, less money from school.”

.@SenWarren on what over $7 billion in cuts will look like for our communities #TenantMarch #NoCuts pic.twitter.com/hzA40LiWut

“The Trump Budget will zero out funding for projects like Meals on Wheels,” said Rep. Velazquez. “Now tell me how does taking food from seniors make America great again?”

Part of my speech today to #TenantsMarch opposing cuts to HUD and in defense of tenant’s rights. pic.twitter.com/WLOCXMbgCh

“We need more people in this fight!” Omar from @CalOrganize tells us how he fought his aunt’s eviction in CA. #TenantMarch #NoCuts pic.twitter.com/UWsqBSM1LD

I couldn’t get on Sect 8’s waiting list & new developments are for the rich. HUD cuts are not right! - Georgette @CalOrganize #TenantMarch pic.twitter.com/4dFHy1nwfB

Following the rally, hundreds took to the streets for the Tenant March.

The Tenant March then stopped outside the HUD building for another rally, followed by a die in.

After the rally outside HUD, the march moved on to one of Blackstone’s private equity buildings.

Thank you to everyone who has joined the fight for housing justice! This is just the beginning. Find out about upcoming actions here and by signing up for the CarsonWatch newsletter. When we fight, we win!