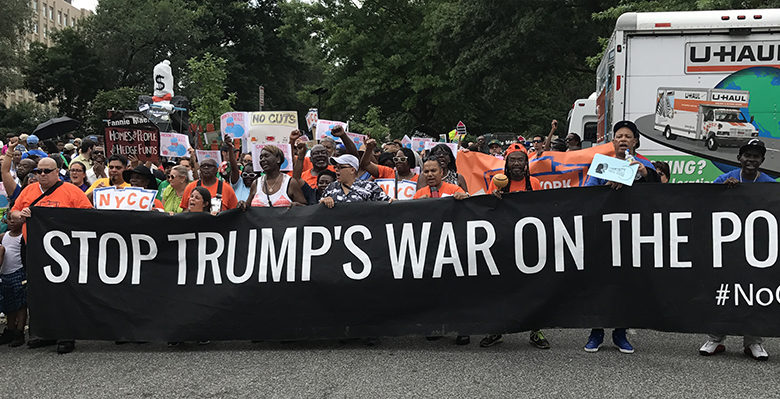 Blog post courtesy of The Center for Popular Democracy.

The Center for Popular Democracy, in partnership within partnership with People’s Action, New York Communities for Change, MH Action, Community Voices Heard, and over 20 other organizations and more than 1,000 community leaders came together on Tuesday, July 12 to demand that Congress and the Trump Administration fully fund federal housing programs that support low income and working families. The event was covered by The Washington Post, US News & World Report, AM New York, and other outlets.

The housing and economic security of significant numbers of public housing residents, single-family homeowners and renters, and manufactured home owners is being devastated by an ongoing takeover by private equity and corporate landlords across housing sectors. To make matters worse, the Trump Administration is seeking to slash the Housing and Urban Development (HUD) budget, the Legal Services Corporation, and other key federal housing programs that help ensure access to safe and affordable housing.

The policy demands from this campaign are simple: 1) Congress and the President should fully fund people’s housing programs; and 2) Congress and the President should adopt protections for renters and homeowners to protect our nation’s housing stock from abuses by private equity actors and corporate landlords.
Tuesday began with an inspiring townhall and rally with members of Congress including Senator Elizabeth Warren, Representative Jan Schakowsky, Representative Nydia Velázquez, and Representative Adriano Espaillat.

Following the town hall, tenants and homeowners marched to HUD to deliver a letter to Secretary Ben Carson. The marchers shared powerful stories illuminating the crisis of affordable housing and held a “die-in” to demonstrate the effect the $7.5 billion cut to HUD’s budget would have on communities.

The action ended on the doorstep of a key lobbyist the nation’s largest corporate landlord, the Blackstone Group. Blackstone is the largest private equity fund in the world and has been leveraging workers, renters, families and our communities for profit. Blackstone’s business model is a prime example of the types of predatory schemes that undermine the housing security of tens of thousands of working families. Moreover, Blackstone leverages its extensive political connections - CEO Steve Schwartzman, as an example, chairs President Trump’s Business Advisory Council - in service of this new form of profiting off of our communities.

Our communities are facing an unprecedented housing crisis. Join us in taking action!