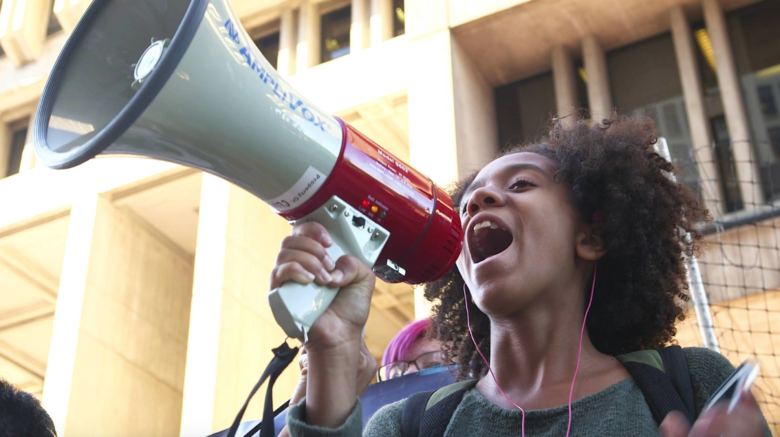 What’s The Call? Homes For All!

Across the US, tenants and housing advocates have been fighting back against huge cuts to Housing and Urban Development funding. In addition to a groundbreaking tenants march in Washington DC on July 12, there were coordinated actions in Seattle, San Francisco, Atlanta Portland, Miami and New York City.  All told there were actions in more than 22 cities across the country,  including protests at local HUD offices, corporate landlords offices and congressional representatives.

In the midst of this week’s actions—in an early sign that resistance to the cuts may be gaining momentum—the House Appropriations Transportation-HUD subcommittee reviewing the Trump administration’s proposal to slash $7 billion knocked the cuts down to $500 million and passed the bill on to the full committee. The budget process has a long way to go and the Senate hasn’t even gotten started so Congress-watchers see the real battle as just beginning.

Meanwhile Fannie Mae, Freddie Mac and HUD are selling off thousands of vacant and occupied homes controlled by the government to Blackstone, Goldman Sachs, Lone Star Funds and other Wall Street predators. These banks and a new breed of corporate landlords  are buying up whole communities at cut-rate price, driving up rents, evictions and homelessness—and even getting tax breaks and fine forgiveness for their criminal scams during the 2008 meltdown.

Every day we see our neighbors displaced; neighborhood stores, schools and cultural institutions gutted and turned into luxury housing; entire communities demolished by government planners and private developers to “revitalize” our neighborhoods and bring about a “renaissance.” A renaissance for whom we ask? Not for us!

Homes for All is fighting back on all fronts.  We stand united AGAINST  HUD cuts, rent increases and evictions and FOR  renters rights, tenant unions and community land trusts.

With 64 organizations in 38 cities and 24 states HFA is organizing a Renter Week of Action and Education September 18-24 when the renter nation—more than 120 million people strong— will stand up to predatory development against the cuts and for building communities that actually work for working people.  We know that the only way to gain access to safe, quality and affordable homes for all is to demand that decisions made about our communities are made BY our communities, not wealthy investors.

That’s why as Carson Watch partner organizations, Right To The City and  Homes For All are gearing up for the largest and boldest mobilization of its kind with the Renters Week of Action & Political Education this September.  Together thousands of renters will take bold and escalated action targeting HUD, corporate landlords and developers and our city and state governments. For four days starting on September 18 through September 21 we’re calling for mass direct action to call for:

Then, immediately following the actions, we’re planning to hold public political education events and assemblies throughout the weekend of September 22-24th to bring thousands of new renters and supporters together to learn together, envision a world without displacement and with homes for all people and to join the movement to fight for housing as a human right and community control of land & housing.

As the national housing crisis accelerates and the federal government is threatening the safety and security of our communities across the board, we must stand up and resist these attacks with boldness and vision. We must lean into our belief that a mass movement, led by the communities most directly impacted by these attacks, is resilient, powerful and wholly capable of not just beating back these attacks but transforming our society to one where people and the planet come before the profits of real estate moguls, banks and corporations.

Join us for the Renter Week of Action & Political Education. Join us to build this world together.

The Renters Week of Action is being organized by the national Homes For All campaign, Right To The City and being supported by Carson Watch.

Homes For All is a trans-local national housing justice movement bringing together public and private housing renters, low-income homeowners and houseless families in a unified fight for housing as a human right and community control of land & housing.

With 64 organizations in 38 cities and 24 states HFA is leading strategic fights for Renters Rights, to build Tenant Unions, develop democratic Community Land Trusts and advance Development Without Displacement in our communities. Take the Homes For All Pledge at www.HomesForAll.org/pledge

Carson Watch is a federal housing watchdog committed to stopping President Trump, HUD Secretary Ben Carson, and their Congressional allies from any attempts to roll back fair housing protections and undermine the housing security of millions of Americans. Join the watch at CarsonWatch.org.