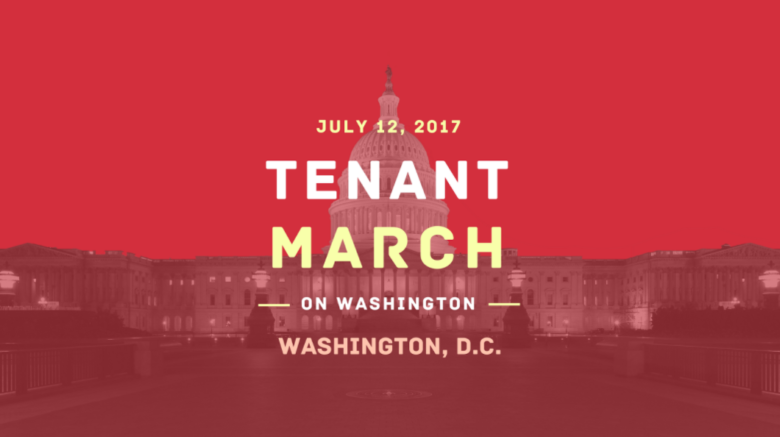 WHAT: Tomorrow, July 12, poor and low-income people from across the country will gather in Washington for a national tenant march to stop Trump’s proposed billions in cuts to federal housing programs. Families on the frontlines of gentrification and the affordability crisis will participate in the march, and urge elected officials to take a stronger stand against Trump’s cuts to HUD programs.

Participants will demand a meeting with Ben Carson and condemn the Trump administration’s close ties to Blackstone, a huge private equity firm that functions today as the largest landlord in the United States and a major driver of evictions.

WHO: Low-income tenants, housing advocates, and community leaders from across the country. Marchers are coming from cities in New York, New Jersey, Pennsylvania, Florida, Massachusetts, Delaware, Maryland, Illinois, and California.

WHERE: Washington, DC. Tenants will gather at Church of the Reformation,

PROGRAM: Below is the full program of events for the tenant march:

3:45 p.m. Speak out about Blackstone’s role in the national housing crisis.

MORE BACKGROUND: Trump’s cuts to HUD programs, if enacted, would put millions of working class and poor Americans at risk of homelessness, making it harder for them to survive in America’s increasingly gentrified and expensive cities. More background on the impact of Trump’s proposed cuts can be found here.

The cuts would eliminate key housing programs that support poor and low income people across the country. Recent research shows that there is no state in the country where a low-income person can afford a 2-bedroom apartment.

At the same time, the federal government continues to allow private equity giant the Blackstone Group to function as the nation’s largest landlord. Private equity firms like Blackstone are represented at the highest level of the Trump administration, which is why tenants will target Blackstone and Blackstone’s top federal lobbyist, Wayne Berman, during the march on Wednesday.