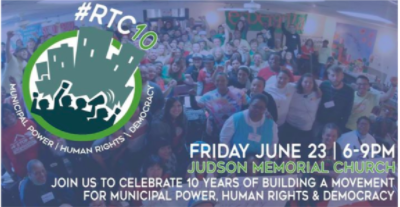 The Right to the City Alliance’s tenth anniversary party on June 23 in New York City offers an occasion to celebrate the explosion of local engagement: Right to the City now stands 64 affiliates strong, active in 38 cities and 24 states.

It also offers a moment to reflect on the historical and intellectual origins of the Alliance. That reflection takes us back to the early days of the World Social Forum in Porto Alegre, Brazil, which inspired participants from communities across the US to hold a Social Forum of their own. Prof. David Harvey recalls that moment in his 2012 book, Rebel Cities: From the Right to the City to the Urban Revolution:

“all manner of social movements came together at the US Social Forum in Atlanta in June 2007, [where they] decided to form a national Right to the City Alliance … in part inspired by what the urban social movements in Brazil had accomplished… The [local groups that formed RTC] had individually concluded after years of struggling on their own particular issues (homelessness, gentrification and displacement, criminalization of the poor and the different, and so on) that the struggle over the city as a whole framed their own particular struggles.”

Specifically, the Right to the City Alliance “developed out of dialogue and organizing between the Miami Workers Center, Strategic Actions for a Just Economy (Los Angeles) and Tenants and Workers United (Alexandria, VA),” as Jackie Leavitt, Tony Roshan Samara and Marnie Brady note in a 2009 essay describing its early years and guiding principles. From New York City to Boston to LA and beyond, they wrote, grassroots groups came together around the principle of “a new form of political belonging not rooted in national citizenship but in urban residency,” a principle from which the movement “draws its political power.”

Member groups within Right to the City, as Prof. Harvey reminds us, “consist of low-income tenants in communities of color fighting for the kind of development that meets their desires and needs; homeless people organizing for their right to housing and basic services; and LGBTQ youth of color working for their right to safe public spaces.”

The concept of a “right to the city” originated in Henri Lefebvre’s seminal work by that name in 1967 as a “demand…[for] a transformed and renewed access to urban life.” As Prof. Harvey defines it, the “right to the city” means that “those who build and sustain urban life have a primary claim to that which they have produced.” Far more than “a right of individual or group access to the resources that the city embodies,” it is actually “a right to change and reinvent the city more after our hearts’ desire.” And “reinventing the city inevitably depends upon the exercise of a collective power over the processes of urbanization.”

The Right to the City Alliance emphasizes building this collective power to reinvent the city.  It asserts “the power of an idea of a new kind of urban politics that asserts that everyone, particularly the disenfranchised, not only has a right to the city, but as inhabitants, have a right to shape it, design it, and operationalize an urban human rights agenda.”

Lefebvre’s idea of the right to the city was not words on an academic page, but a cry and a demand raised by residents. Harvey writes that it “primarily rises up from the streets, out from the neighborhoods, as a cry for help and sustenance by oppressed peoples in desperate times.”

The Right to the City Alliance has been raising that cry, and making that demand, since before the 2008 financial crisis. In 2013, it launched a national Homes for All campaign, “with the goal of broadening the conversation of the housing crisis beyond foreclosure and putting forth a comprehensive housing agenda that also speaks to issues affecting public housing residents, homeless families, and the growing number of renters in American cities.” With the growing financialization of housing that tramples on the human right to housing, and displaces tens of thousands in violation of international standards of human rights, the work of Right to the City and Homes for All is more important than ever.

CarsonWatch welcomes you to join us in celebrating the work of the Right to the City Alliance and of its dozens of local affiliates. By fostering trans-local action across the country to reinvent our cities to fulfill the deepest desires of their residents, they are showing that visionary resistance is the way forward for us all.

If you are in the New York City area, join the celebration on Friday June 23, 2017 at Judson Memorial Church from 6:00-9:00 PM. Tickets are available here.

This work doesn’t happen without resources, people and support. With impending cuts to HUD and aggressive practices of corporate landlords being supported by the current administration, it is imperative that we invest in grassroots, frontline visionary resistance like Homes For All and Right To The City. If you can’t make the party you can support with a contribution here.