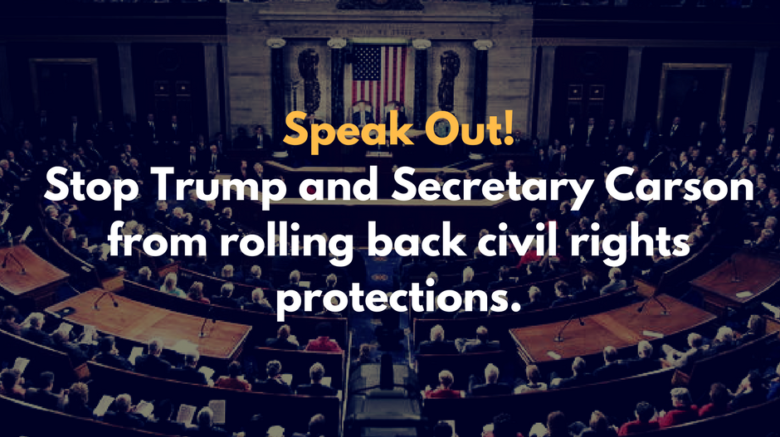 Anne is an Equal Justice Works Fellow at Public Advocates. She works on displacement and fair housing.

Readers of CarsonWatch are aware of the threat to critical funding for housing and community development in the proposed Trump budget.  But the threat to HUD regulations protecting civil rights is equally important.

That’s why we are so concerned about the Trump administration’s “2 for 1” deregulation initiative—and why we are speaking truth to power by participating in a public comment period to demand that HUD continue to protect equal housing opportunity for everyone.

But first, why is regulation so important? To sum it up, regulation is a tool by which democratic governments protect people from harm. Regulation sets limits on the unbridled exercise of corporate power, and federal regulation also sets limits on the unaccountable exercise of state and local government power. Regulation protects children from exposure to toxics; protects travelers from unsafe cars, roads and airplanes; and protects consumers from predatory financial products.

So what does this look like at HUD?  HUD regulations protect tenants’ civil rights and create an important bulwark against mistreatment and abuse in the housing market.

In 2013, HUD implemented long-standing law protecting people of color, families with children, immigrants, and people with disabilities from housing policies and practices that create disproportionate harm by finalizing the “Discriminatory Effects Rule.”  This regulation is instrumental in securing access to housing for immigrants with limited English proficiency and people with criminal records who have served their time and are attempting to find a new footing in society. Experts agree that the Discriminatory Effects Rule is crucial to fighting institutionalized racism and corporate policies that prey on communities of color—and ultimately, to making good on our society’s promise of equal opportunity for all.

Then, in 2015, HUD took a significant step towards living up to its obligations under the 1968 Fair Housing Act, a cornerstone civil rights law passed in the wake of the assassination of Dr. Martin Luther King, Jr.  The 2015 “Affirmatively Furthering Fair Housing Rule” (called the AFFH rule for short) ensures that states, local governments, and public housing authorities that accept funding from HUD will “take significant actions to overcome historic patterns of segregation, achieve truly balanced and integrated living patterns, promote fair housing choice, and foster inclusive communities that are free from discrimination.”

The AFFH Rule has been a target of conservative opposition since it was adopted, and Carson himself once described it as “social engineering.”  But we know that the AFFH Rule is a much needed tool that empowers marginalized communities to demand better treatment, whether that be equitable investment in our neighborhoods, improved transit service strengthening access to good jobs, or affordable housing in high opportunity areas.

And that’s not all.  For example, another regulation finalized in 2016 protects tenants against sexual harassment and other types of harassment based on their personal characteristics (like race, national origin, or disability status).

These important civil rights protections are under threat by President Trump’s “2 for 1” executive order in January.  Essentially, the order requires HUD, and every other federal agency, to eliminate two existing regulations before adopting one new regulation. HUD is beginning to implement this destructive policy through a regulatory comment period, going on right now, asking for input on which regulations are “outdated, ineffective, or excessively burdensome.”

We know that corporate and conservatives interests—not to mention officials within the Trump administration—are hoping that the deregulation agenda can serve as pretext for rolling back civil rights protections.  Stand with us and tell HUD :